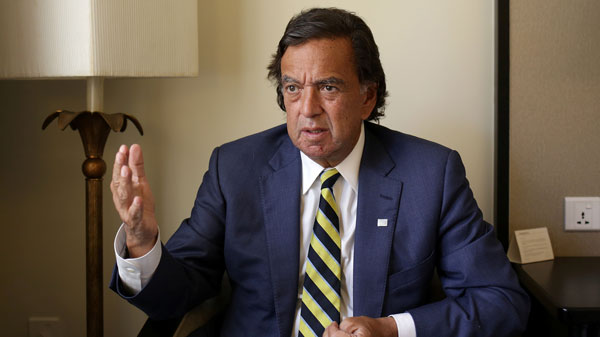 The Myanmar government on Thursday said it asked veteran U.S. diplomat Bill Richardson to resign from an advisory panel on the Rohingya Muslim crisis in western Myanmar’s Rakhine state because he was pursuing “his own agenda.”

The former governor of New Mexico and former U.S. ambassador to the United Nations was visiting Myanmar as part of a 10-member international board advising the government on how to implement the recommendations of an earlier commission led by former U.N. chief Kofi Annan, regarding the situation in ethnically and religiously divided Rakhine state.

A military crackdown targeting the Rohingya in three northern Rakhine townships last August has driven an estimated 688,000 members of the minority group to neighboring Bangladesh, in a campaign that the U.N. and U.S. have said amounts to ethnic cleansing.

“In view of the difference of opinion that developed, the government decided that his continued participation on the board would not be in the best interest of all concerned,” said a statement issued Thursday by the office of Myanmar’s de facto leader Aung San Suu Kyi.

But Zaw Htay, director-general of Aung San Suu Kyi’s office, told RFA’s Myanmar Service the same day that Richardson decided on his own to both join and leave the advisory board.

The government official also said Richardson verbally attacked Aung San Suu Kyi during a meeting and overstepped the boundary of his position by requesting that she quickly address the situation of two detained Reuters journalists in order to protect press freedom in the developing democracy.

The journalists, who were arrested on Dec. 12 after having dinner with two police officers, have been charged with obtaining state secrets in the course of their reporting on the crackdown in northern Rakhine state. They face up to 14 years in prison if convicted.

“I don’t think he is clear about his mandate as an advisory board member which is only for Rakhine issue, not for human rights, democracy, and freedom of expression in the entire country,” Zaw Htay said.

The official also said Richardson’s request to meet with Home Affairs Minister Kyaw Swe to discuss the detentions of the two reporters was not within his mandate as an advisory board member.

The meeting had been abruptly cancelled, Richardson said in a statement issued on Wednesday.

“He was annoyed when he tried to do more than [what is specified] his mandate as an advisory board member and he quit the board,” Zaw Htay said.

In his statement on Wednesday, Richardson announced his resignation from the advisory board, saying that the body is likely to become “a cheerleading squad for government policy as opposed to proposing genuine policy changes that are desperately needed to assure peace, stability, and development in Rakhine state.”

He went on to say that he was “extremely upset” with Aung San Suu Kyi’s “furious response” to his request regarding the two detained reporters.

The New York Times quoted Richardson as saying the Myanmar leader was “quivering” with rage, after the exchange.

“If she had been a little closer to me, she might have hit me, she was so furious,” The Times quoted Richardson as saying.

He also expressed concern over Myanmar’s attitude towards the U.N., rights groups, and citizenship for the Rohingya, who are considered illegal immigrants from Bangladesh though many have lived in Myanmar for generations.

“I was taken aback by the vigor with which the media, the United Nations, human rights groups, and in general the international community were disparaged,” the statement said. “I was also alarmed by the lack of sincerity with which the critical issue of citizenship was discussed.”

Zaw Htay said that Richardson arrived in Myanmar this week with preconceived notions about the situation in Rakhine state without first visiting the area.

“He first needs to go to Rakhine state and make comments after the visit,” he said. “We see that he has come here with preconceptions. The other four members [of the board] who are also foreigners are going to Rakhine state and observe the situation on the ground. After that, they will suggest to us what we should do about it.”

“It is not reasonable for him [Richardson] to blame us before he sees anything,” he said.

Zaw Htay also said he did not know whether Richardson’s resignation would generate more pressure from the international community over the Rakhine crisis.

“We don’t know whether we will have pressure from the international community, but the Myanmar government will do what it has to,” he said.

“What we can say is that we will keep working on what we have to do to implement the committee’s obligations with other board members,” he said.

Richardson in his statement also questioned the commitment of advisory board chairman Surakiart Sathirathai, a former deputy prime minister of Thailand, in implementing the recommendations on Rakhine state issued by an earlier panel chaired by former U.N. chief Kofi Annan.

That commission’s report called for reviews of the country’s 1982 Citizenship Law, which prevents the Rohingya from becoming citizens, and an end to restrictions on the Muslim minority to prevent further violence in the region.

“I am also concerned that the chairman of the advisory board Dr. Surakiart Sathirathi, is not genuinely committed to implementing the Rakhine Advisory Commission’s recommendations and to addressing the root causes of conflict in Rakhine,” Richardson said.

He also said Sathirathi’s suggestion that the board meet only twice during the course of its yearlong tenure “demonstrates a lack of seriousness with which he views the very real challenge faced by Rakhine state and the Myanmar government.”

“His statement leaves no doubt about his grave concern about the lack of seriousness with which implementation of the recommendations of the Annan report is being pursued,” said Laetitia van den Assum, a career Dutch diplomat and member of the Annan team, in a Twitter post on Wednesday.

Richardson told Reuters news agency on Wednesday that the board was conducting a “whitewash” and that Aung San Suu Kyi demonstrated an “absence of moral leadership” over the problem.

Also on Wednesday, U.S. State Department spokeswoman Heather Nauert said Richardson’s decision to resign from the board and his reasons for doing so were “cause for concern,” though he acted as a private citizen in joining the body, Reuters reported.

“Ultimately, the Burmese government and military have the authority to determine whether the advisory board will succeed,” she was quoted as saying. “The United States has made clear that we are willing to support good faith efforts to implement the Annan commission recommendations.”

A statement issued by the nine remaining members of the advisory board on Thursday said the panel had been informed that Richardson was asked to leave and that any comments about it “whitewashing” or “cheerleading” lacked “complete legitimacy,” Reuters reported.